The Magic of Polytopes-Mandalas
Polytopes are 3-Dimensional shadows from higher dimensional polyhedra  (4-Dimensional & above). These 3-D shadows, when rotated suddenly out of chaos, line-up & reveal, cast mandala patterns into
2-D of 2,3, & 5-fold symmetry.
While constructing a stainless steel 120-cell (4-D dodecahedron), I asked myself the fundamental question:
‘Why are there 3 symmetry groups’?
The answer: It is a matter of perspective. Where, what vantage point is the object being viewed from?
Edge (which is a line) first creates the 2-fold axis. The corner or vertices first, the 3-fold mandala. The polygon (polyhedra or cell) first, the 5-fold symmetry. This is the reveal, the ‘aha’, the surprise which gives us these beautiful 2-D mandalas, shadows from higher space (4-D & above), a glimpse the only way that we can physically view them in our 3-Dimensional world. 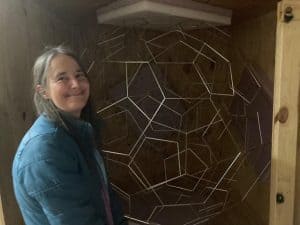 Amina Bühler-Allen has been lecturing and facilitating hands-on math workshops at math conferences and in classrooms worldwide since 1990. She has also designed and manufactured many interactive math products. Her Color Fields tiles, magnetic, and Static Cling geometric shapes have been used in classrooms across the United States, and at the Institute of Traditional Arts in Casablanca, Morocco. In 1999, she met and teamed up with Marc Pelletier, who was engaged in the same pursuits. He introduced Amina to Zometool. In addition to making tiling products, they explored 2, 3, 4-D (and above) geometry, including Zome architecture and recursive ornament. Her discovery of the Spidronized dodecahedron was featured on the cover of the October 2006 issue of Science News. In addition, Amina has worked on projects with or for Scott Kim, Dale Seymour, H.S.M.(Donald) Coxeter, John Horton Conway, Sir Roger Penrose, Rinus Roelofs, Daniel Erdely, Kristof Fenyvesi, Lennart Green, Walt Von Ballegooijen, and others.

1 thought on “CoM | The Magic of Polytopes–Mandalas”