Please join us starting 10 minutes before the session using the following button.

Kinesthetic Conundrums
The connections between mathematics and dance are more surprising than we might think, and may lead to charming kinesthetic and mathematical puzzles. Elements common to both include shape and geometry, pattern and symmetry, design and structure, and perhaps most importantly, a reverence for elegant solutions. We will playfully explore several such puzzles that are geometric, combinatoric, and topological in nature. Embodying these puzzles can fuel new perspectives on problem-solving, and lead to examining how the artistic and analytical minds enliven each other. 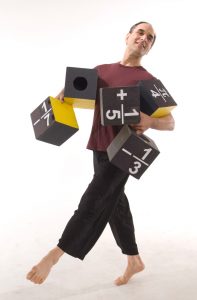 Karl Schaffer is a dancer/choreographer and mathematician who has co-directed the Dr. Schaffer and Mr. Stern Dance Ensemble with Erik Stern since 1987. Schaffer has written widely on dance and mathematics, and his choreographic work often integrates the two disciplines. His recent concerts include Nevertheless She Persisted: The Daughters of Hypatia celebrating the lives and work of important women mathematicians; Pitter Pattern, exploring beautiful and enchanting patterns in dance, rhythm, and shape; and Harmonious Equations with Keith Devlin and world music group Zambra, highlighting the most important equations of mathematics.

Schaffer and Stern frequently lead workshops and events on math and dance, and they are part of the Teaching Artist Roster of the Kennedy Center for the Performing Arts. Dr. Schaffer and Mr. Stern have performed internationally, and the company has received five National Endowment for the Arts awards for their dance and math integration work. Their book Math Dance, co-authored with Scott Kim, shows how dance and math can be brought together on stage and in the classroom. Schaffer teaches mathematics at De Anza College, and received his PhD in graph theory from UC Santa Cruz.