Please join us starting 10 minutes before each session using the following button.

There will be a Gather session at the conclusion of the talk, for socializing.  To be added to the attendance list to be able to join please contact us via gather@g4gfoundation.org 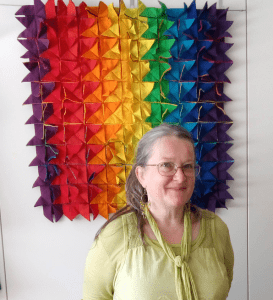 In my experience, many people, especially women are scared of maths or were poorly taught, I love the way it underpins everything in the world and part of my mission is to make maths accessible to people through visual means.

The presentation will cover the development of my Mathematical Magic Colouring System, which runs through many strands of my work. Plus some of my explorations with Optical illusions, Spiral grids, Fabric Origami Windmills & Pinwheels, Multiview/Polymorph sculptures, Paper cuts/Kirigami, Knots, Rings & Things, Jacob’s Ladder, plaiting/3D structures, Mani-fold Maths shape/book project, and more…

Louise Mabbs has been called a ‘visual mathematician’. In over 40+ years of working with textiles she has explored many aspects of design and technique. Her work is colourful and eclectic ranging from tight geometric patchworks to tactile organic embroidered subjects.

After an Art Foundation course in at Derby Lonsdale College of Higher Education (1981-2), she did a degree in Constructed Textiles at Winchester School of Art (1982-5) specialising in weaving and double cloth, where she discovered the politics and design possibilities of Art Quilts.

She returned to Derbyshire to set up a studio and shop, making commissions and teaching many textile skills and began to rediscover her love of mathematical design. Following studios in Manchester, London and Brighton, she recently moved to Newcastle.

She has written for many publications and co-wrote a book on Fabric Origami in 2006 The Quilter’s Guide to Twists & Tucks (Anova, UK) /Origami Quilts (Martingale, USA) and is working on several other themes.

She has taught and lectured nationally and internationally, in Adult Education, privately, and at many Maths and Origami conferences, including Bridges 2006 & 10, 7OSME, MathsJam plus a vast variety of textile events or exhibitions.

Louise is open to commissions and collaborations and would love to work within academic research and enquiry. She is particularly interested in synaesthesia, how we see colour and optical effects and is passionate about making mathematical ideas easy for the general public to understand through art.