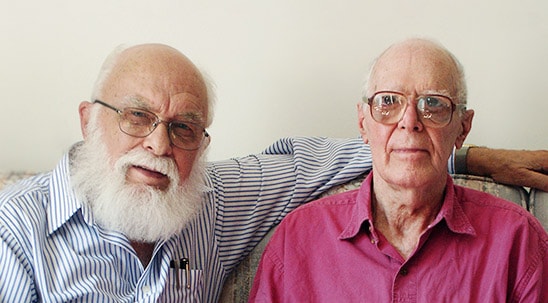 The G4G Community has lost another Icon. Randi, as most of us referred to him, was the beacon of rational and critical thinking. He was a co-founder of the Committee for Skeptical Inquiry. He championed investigating parapsychology and pseudo science, and reporting/demonstrating to the mainstream that it was nothing more than “Flim-flam!” He was an accomplished author. Professional magician and escape artist. A MacArthur Fellow. An honest liar (see more on  documentary his life and work here).

Randi…knows more about science than some scientists I have met…Scientists untrained in the conjuring art of deception are the easiest people in the world to fool. That is why Randi, a magician, is so much more capable of detecting fraud than any scientist, including especially parapsychologists. He knows how, as few scientists do, all the best ways to set traps for catching psychic swindlers. If you want to know how Geller bends spoons, don’t ask a physicist, even if he won a Noble Prize. Ask me or Randi

I remember showing him Tenyo tricks at the bar of one of the hotels.

I first met Randi in the spring of 1987, when he gave a public talk in Honolulu, sponsored I believe by the University of Hawaii at Manoa. I was so impressed that I bought over a dozen copies of his classic “Flim-Flam!” book and shipped them to friends around the world. This was soon after Randi busted a televangelist who was hugely popular nationwide, and had recently scammed gullible Hawaiian audiences out of a reputed $1 million.
While chatting after his talk, Randi told me that a few months before he ran into Andy Warhol in NY, who bragged that some charm he was wearing around his neck was protecting him from serious health issues; Warhol had died shortly thereafter.
Flash forward to the final Amaz!ng Meeting in Vegas in 2015, where Randi’s extraordinarily well-organised conference paid special tribute to the role Martin Gardner played in the skeptical movement for half a century. He had everyone start their presentation by revealing some flim-flam they once believed in. I fessed up that as a teenager I’d dabbled in ouija board nonsense, though I didn’t have the courage to tell that august audience the full story. I’ll say it now for the first time ever: it was me moving the ouija board decades earlier. There, he’s finally made an honest liar of me!
Thank you James, for your relentless and patient championing of rationalism, and for all the good you did for the world.

James Randi spoke at General Electric’s Corporate Research and Development Center in Schenectady, NY when I was doing research there as a graduate student. This would have been around 1985. I was just learning the scientist’s approach to knowledge and learning, and Randi’s talk was largely responsible for getting me thinking like a skeptic.

Chicago Tribune – In memory of the amazing James Randi, ignore the charlatans and listen to science

The Wrap – James Randi, Magician and Paranormal Debunker, Dies at 92