It is with great sadness that G4G notes the death of longtime G4G community member Marc G. Pelletier  (Aug 4, 1958 – Nov 6, 2017) from the USA. If you have any references, memories, or tributes that you would like to share, please email us at support@g4gfoundation.org.

When Marc Pelletier died at age 59 on November 6th, 2017, we lost one of the great mathematicians of our age. Marc who? Most mathematicians (let alone the rest of us) don’t recognize his name. He called himself an artist. He never got a PhD. Instead of graduating, he dropped out of high school and hitchhiked from Peterborough, New Hampshire to Albuquerque, New Mexico, in order to “occupy” Steve Baer. While reading Baer’s Zome Primer, Marc realized that wireframe shadows from the 4th dimension in H.S.M. Coxeter’s Regular Polytopes could be constructed in Baer’s 31-zone system. “My mind exploded!” (a typical Pelletier expression).

Several “occupations” later, Marc was sprawled out on a mattress in artist Clark Richertis’ Boulder studio. Clark co-founded Drop City, Colorado, the prototypical hippie commune where he worked with Baer. Baer later gave Clark one of the 50 Zometoy kits in existence, and he, in turn, showed it to me. Clark looked at Marc, who was designing a card-stock abstraction of the Zometoy node, then at me — I was fondling my crude version of the same idea  — and said, “You two ought to get along real good.”

I fell in love with him. Not that I swing that way… but Marc Pelletier taught me everything I know about Zome geometry. He didn’t just enlighten a “dunce” like me (I don’t use the term lightly: when Clark introduced me to the Zometoy, I was too dumb to use it). Twelve years later we were producing the Zometool, and Marc taught the world using Baer’s amazing discovery. Among his students were “Donald” Coxeter (the greatest geometer of the 20th century), double-Nobel-prizewinner Linus Pauling, Daniel Shechtman (Nobel-prizewinning quasicrystal pioneer), the brilliant British mathematician John Conway, Roger Penrose (“the Einstein of the 21st century”)… and the list goes on. 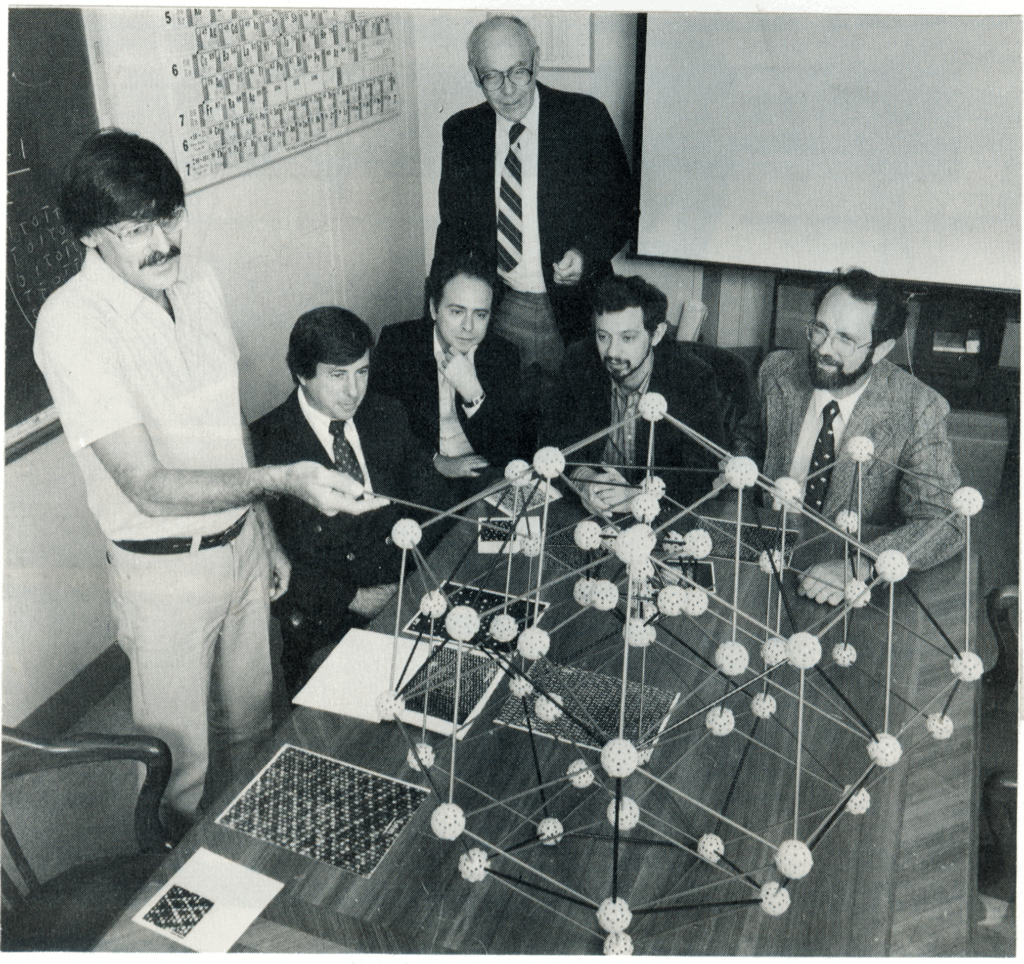 Sir Roger was always gracious when he visited Marc. In my world, Baer and Pelletier are also “Einsteins of the 21st century.” Bear once said “Pelletier was born knowing more geometry than I ever will” — high praise from the master. Of Baer’s discovery, Marc said, “It’s as important as E=mc².” Why? “The structure of number is the structure of space.” Marc hardly ever wrote stuff down. He loved to think for the pure joy of thinking and would share his gems with anyone lucky enough to listen. Like the works of J.S. Bach, Marc left us a body of work — including the Zometool —that we’ll be figuring out for hundreds of years. Death isn’t pretty: Lennie Bruce fell off a toilet while shooting up. Marc’s heart exploded and he bled to death in the arms of his wife of nearly 20 years, Amina. We’re all still bleeding.