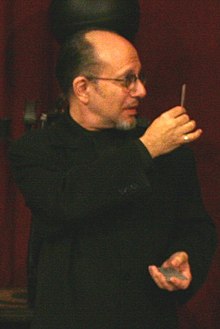 1. I’ve known Max Maven since he was 16 years old, while he was still Phil Goldstein. This was a few years before he invented Max Maven. We had a sort of pen pal relationship, talking magic and such. I used to perform his first marketed trick Full Circle, which would still fool magicians to this day. We never met in person until maybe 2 years after he became Max. I was able to make my first performing and lecture tour of Japan solely due to a recommendation from Max, He was that kind of good person. Only once did I ever completely fool Max with a card trick. After I performed it for a group of magicians, Max said to me “you sonofabitch.” That’s how I knew I fooled him. He must have stayed up all night, because the next day he came back to me with the correct solution.
2. Max had quote a mischievous streak. There was a small group magicians at the Magic Castle in Hollywood, the names of whom would be known to other magicians, who decided to play a practical joke on Dai Vernon. The group included Bruce Cervon, Diana Zimmerman, Johnny and Pam Thompson. Vernon was a living legend who lived to the age of 99, and was respectfully known to everyone as The Professor. This group went to Mexico just south of San Diego, found a grizzled peon wino, bought a large “touristy” sombrero for him and took him to a bar. In exchange for a bottle of whiskey they photographed him with cards, coins and dice in unlikely positions. They crafted stories of impossible tricks this guy was performing at the bar. One of the tricks they made up was that he could shoot a rubber band to the end of the bar and it would roll back across the bar to his hand.
When they came back and pulled their joke on The Professor, he merely said, “Yeah, some kid showed me how to do that at a magic convention in Texas.” They never realized one of their imaginary tricks could actually be done.
Fast forward about a year and my first visit to the Castle, around 1976. I met with Max. Max was showing me around, and even though I was wearing a garish lapel pin with blinking LED lights, Max never told me it would make me quite a pariah among the regulars. He spotted the aforementioned group and cajoled me into performing a specific trick for them, and admonished me to keep the lapel pin turned on.
So I went over and showed them the boomerang rubber band trick. It was the same one I showed at a session with Jim Gardner and Mark Mitton at the last G4G before the pandemic. Afterwards, I looked up at them and smiled, and was met with 4 heroes of mine, arms folded, wide-eyed stares and not saying a word. I sort of said thanks and slinked away. As I headed back to Max, I noticed he was doubled over with laughter. He explained why they had reacted that way, and told me to take off that stupid lapel pin.Thanks a lot, “friend” Max. But you gave me a great story to tell. For I was the young lad who had been taken aside by the one-and-only Dai Vernon who asked me in private to show and explain the rubber band stunt. And I can honestly say, with tongue firmly in cheek, that I gave a “magic lesson” to The Professor.
No, really, thank you Max!
– Dan Garrett
Max Maven is huge! It’s hard not to have come across one of his TV specials and know of him as a mentalist. His whole stage persona would hint at a distant and perhaps arrogant person. My experience was the contrary! I had the chance to meet him a couple of times at the G4Gn and exchange lightly through the web.
On one occasion I was on a downtime volunteering as a stagehand looking at said stage. He simply sat beside me and before I knew it we were discussing the history of playing cards and going into depth about some of my favourite magic effects both on a mathematical and historical level. I likely learned more in this half hour about the history and theory of magic than going through 10 books on the topic.
– Tiago Hirth
This morning, Susanna and I enjoyed Max memories.  He was our friend since the mid-80’s.  Susanna met him before I did at magic convention in Japan where they were both helping with translations. Then later this morning, we called Mark Setteducati who knew him even longer.. as did many of you.
Many of us have a mutual friend who is an honest and forthright older woman who lives in Greenwich Village.  Max always call her “dragon lady” in an affectionate sort of way.  That approach made Max an honest and forthright man.
So glad that we had him back at recent Gatherings including his performances of his full evening shows. Boo! That was such a blessing. Just two weeks ago, he helped me find the right magician for a big event in LA.
We should make a tribute at the next Gathering.
All the best to all of you!  Life is most precious, and Max is missed.
– Mark Mitton
Great story he told me years ago:

Growing up in Princeton, as a very small child playing with his mother on the family lawn, Max remembered a car stopped outside and a disheveled man getting out and pointed at him, excitedly crying out “Baby, baby”. He got back into the car and was driven away.

It was Einstein.
– Colm Mulcahy

So sad to hear about Max Maven’s passing. Eugene, his best friend, introduced me to Max when I first started taking lessons from him in the early 1980’s. Max was kind and helped me with a few magic pieces I used in my close-up show.

In the early 2000’s, Max said he would love to see a Bicycle Tactical Field deck inside a bottle. So, I surprised Max and made this bottle for him. He loved it!!
He will definitely be missed. Yet, nice to know Eugene and Max are back together again.
– Jeff Scanlan

Back in 1977 I bought a copy of Phil Goldstein’s Blue Book of Mentalism. (Actually, I bought all of the color series.)  That was back when Max was writing books for magicians using his birth-name.  I asked him to sign it, which he did “From one to another. . . ”  That refers to “from one Goldstein to another.”  I asked him if that squiggle was really his signature, and he said it was.  I didn’t really think too much more about it at the time.
Then, a year or two ago, as I was re-reading the book I took another look at that signature and realized what it was.  It was like a secret code suddenly appearing in plaintext.   Note the two dots which represent the O and L.  And the dot above the I.
I always loved chatting with Max.  So much to think about.  I admired his 100% commitment to his art.  (That haircut wasn’t just for the stage.)  And I loved the fact that he could always totally fool me at will.  One of the first tricks that he ever did for me, and also one of the last that I ever saw him perform, was the trick where I looked at a card and merely thought of it.  Then he spread the deck in a fan with the cards facing to him, ran his fingers above the edges of the cards and asked me to say “Stop.”  When I did, his finger was touching my thought of card.  WTF?????
To my friend, Max Maven, you are the best.
From one to another,
– Eddie Goldstein 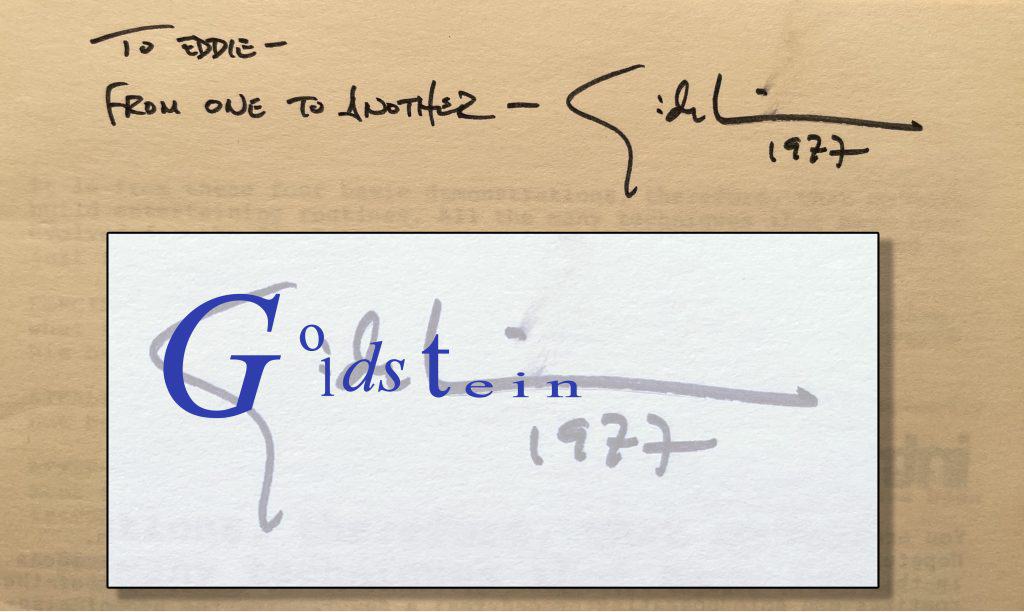 I once asked Max how to become the best mentalist/magician I possibly could be. His one-word reply was “Read!”, I asked what I should read. He locked me with his vulture’s gaze and replied, “Everything! If I meant you to read one thing specifically, I would have said that when you asked. Read EVERYTHING!” I have since discovered he gave the exact same advice to many magicians, and as far as I know, all of them also give that very same advice when asked by younger and/or more inexperienced magicians, I know I do.
– Curt ‘Mex’ Nicol DD PhD 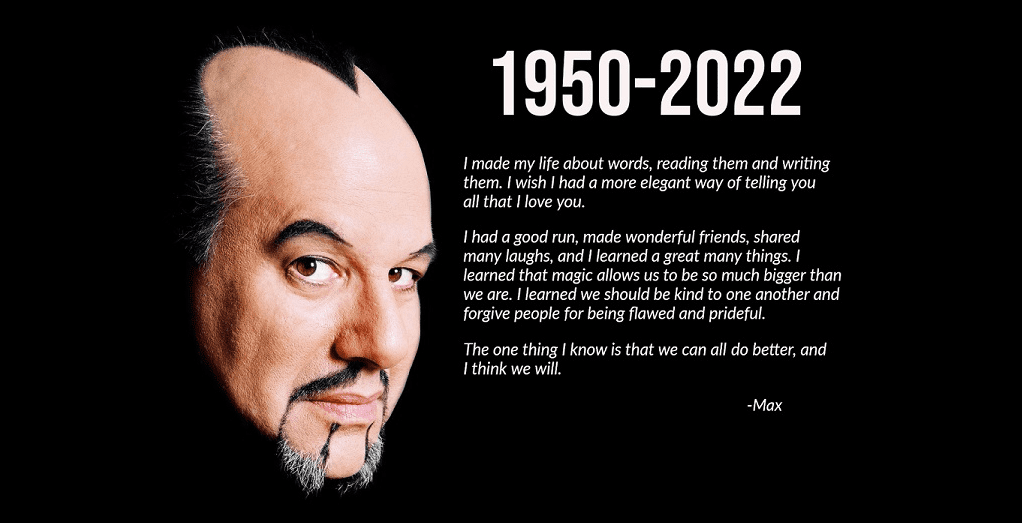